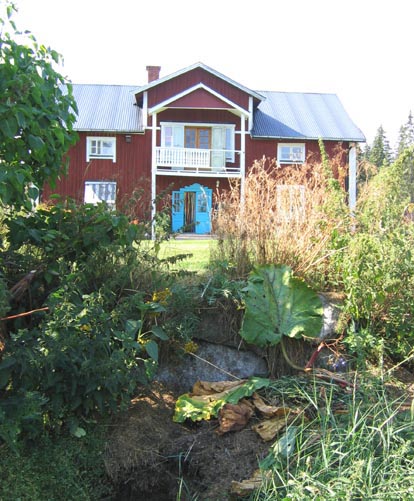 The crofter's holding Risnäs through a somewhat far-fetched alliteration lies behind the name Rissler.
The holding still is there but the original building has been replaced, probably in the middle of the 18th century.
Some 15 meters in front of todays Risnäs the foundation for the old building can be seen covered by rubarbs and weeds.

Today there is a village named Risnäs not far away from the old holding.
In 1701 a boy was born here. He was christened Pehr and according to tradition his full name would have been Pehr Eriksson as he was the son of Erik Önnesson. But when he was given the possibility to study to become a priest he had to, in accordance with fashion in those days, find himself a more "classy" name preferably with a Latin or a German touch.
So he became Petrus Erici Rissler.

His younger sister Catharina also adopted the name Rissler. This was probably a unique thing to do for a young girl in those days.
She married Jonas Norberg and in 1744 they bought Pehr (or rather Petrus) and another brother out of the family farm. They had a son who like his uncle became a priest and took the name Rizén - again with reference to Risnäs.
In the beginnig of the 19th century the greater part of the village Risnäs was owned by three descendants of this Norberg family.

Back to start page

Back to previous page